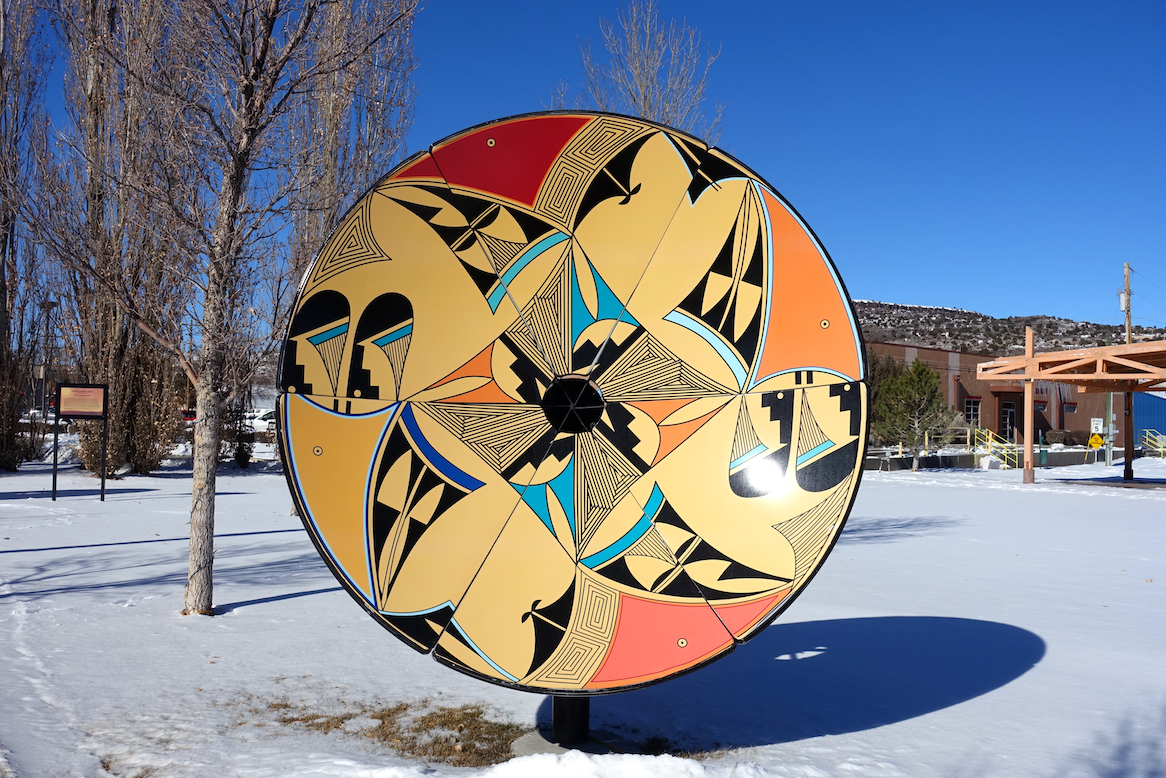 A white whisper of snow dusted the sandstone buttes of the Lukachukai mountains that are sacred to our people the Dineh´. Franz and I had come out to the Navajo Reservation for a whirlwind tour to visit family out on the “Rez” with our son and his Austrian girlfriend, who was a first time visitor to the US. We wanted to share with her the beauty of our homelands but were pressed for time due to our guys having to be back in California to give a talk. Can the Southwest be done in 7 days in January? Yep! Enjoyable? You bet! It can be as long as it’s not the worst winter on record and if one focuses on one main destination per day it can be quite doable. The day before we had flown in from San Diego to Albuquerque, New Mexico and we overnighted with family in Placitas. When in the vicinity a must stop is at the iconic Range Cafe in nearby Bernalillo for some local eats and live blues music. 7 days is not a whole lotta time out in the great expanse of the American Southwest. That and a weather front had just dumped substantial snowfall on the route out to Arizona that included several high passes and remote roads. This was of concern as well as the government shutdown which affected the clearing of the highways and had caused the closure of many national parks and monuments.

As luck would have it the dawn brought sunny skies and clear roads and the Navajo Nation had stepped up to ensure that the highways out on the Rez were maintained. The stars had aligned in our favor. Our route from Placitas via I-40 to Grants, New Mexico included a side tour via Route 66 to check out a Native Basket Array installation at the Fire and Ice Park. The project highlighted the work of local artists who had repurposed satellite dishes and painted them in traditional designs to create unconventional pieces of public art. While there a quick peek in at the New Mexico Mining Museum is well worth the time taken and holds a collection of related artifacts from the area and some tribal art.

Route 40 winds near the ancient El Malpais National Monument where the landscape morphs into unusual basalt formations with dormant volcanic spires and hardened lava flows. The otherworldly terrain was formed from 115,000 to as recently as 2,000 years ago and the local tribes the Zuni, Acoma, and Laguna Pueblo people have inhabited this region for over 10,000 years. One’s imagination can easily take hold out here in the vast spaces of this arid region. And mine did just that as my sister recounted a story that told of large lizards that inhabit the remote lava tubes of this eerie landscape and are said to be voracious eaters that keep the locals and animals away. The 60’s sci fi film Journey to the Center of the Earth came to mind. Creepy! This of course intrigued our guys and Franz set out on foot to check out an underground flume they had spotted on Google Earth and Stefan followed him with a drone recording his progress. I am happy to report that he encountered no flesh eating lizards but perhaps they were hibernating in the winter months only to emerge come spring with ravenous appetites… but regardless of the lack of large reptiles the footage they caught was pretty spectacular!

The frozen waters of Wheatfields Lake lay silent with only a whisper of falling snow. If one is lucky majestic eagles can be seen perched along the pines lining the shore. The Diné/Biitah Scenic Road winds right past Wheatfields Park at 7300 feet which is known for its trout fishing then steadily climbs the Chuska Mountains until descending into the Lukachukai Valley with the mountains (9466 ft.) in the distance. We spent an evening at the homestead and planned the next day to take in Canyon de Chelly National Monument, just one of the many treasures on Navajo tribal lands.

After a lovely family evening our small group took off to visit a special place in Canyon de Chelly that involves rugged muddy roads and takes effort to get to especially in winter. The view from the point is quite spectacular and mother nature does not get any more beautiful than this. The canyon itself covers 84,000 acres and is about 45 miles long with sandstone faces up to 800 feet tall. Carved into the Defiance Plateau by the Chinle Wash this magnificent gorge is considered sacred to both the Navajo and the Hopi and has been inhabited for over 5000 years and still is today. Prehistoric cliff dwellings and rock art dot the canyon walls with the grande dame spire of them all, Spider Rock (830 ft) presiding over the canyon. Spider Rock, or Na’ashje’ii, is sacred to the Navajo and many stories are associated with her, such as how she taught the Navajo how to weave as well as her ensnaring naughty children in her web that has kept many little kids in check over the years. 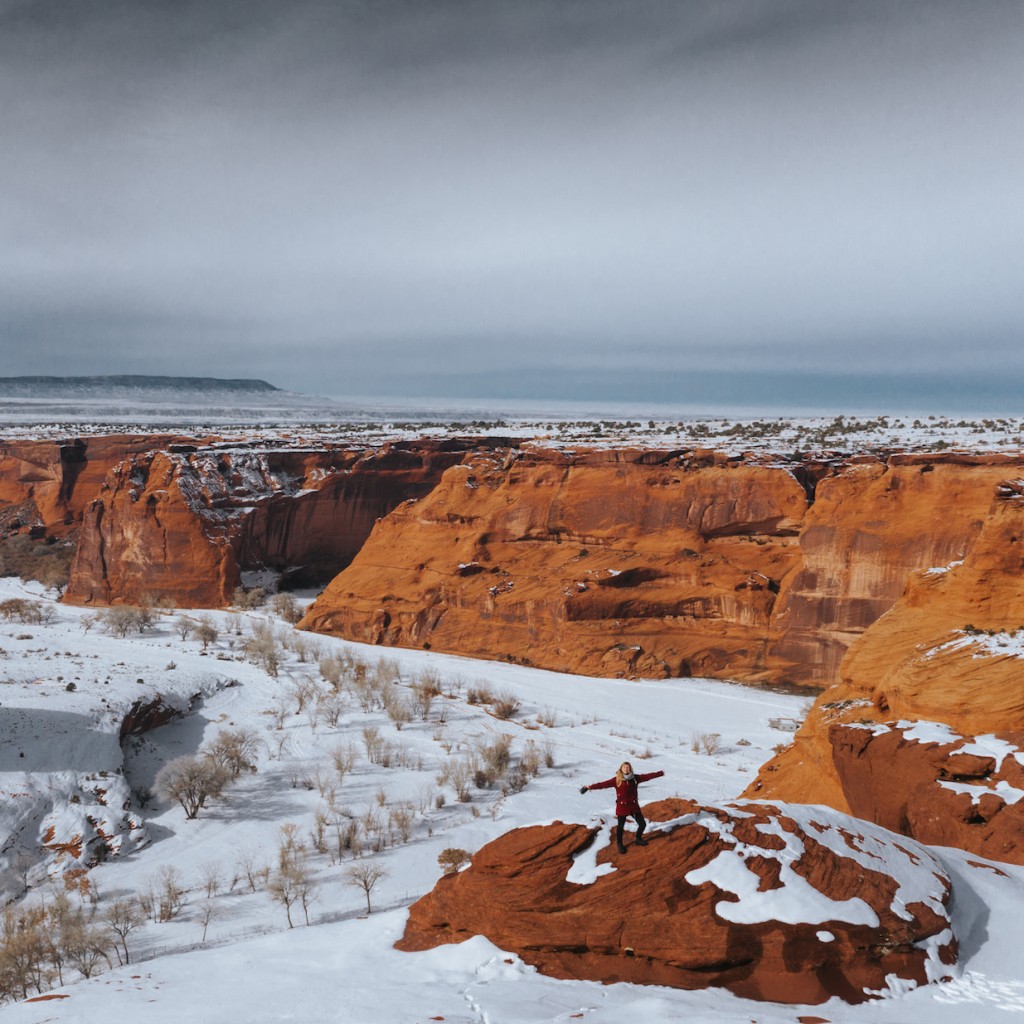 We woke to snowfall the following day which kept us from exploring further afield instead we hiked closer to home then cozied up to a warm fire
and played a rousing game of Scrabble. To my dismay one of our native German speakers won the game with a whopping 84 points for the word “question!” Ouch! Our trip out to Lukachukai was way too short but we had to get out to California and opted to drive back with a few stops along the way. With our first time visitor in tow we headed to our next destination via Round Rock and Kayenta to Monument Valley, about a 2 hour drive away. One simply cannot visit Navajo Country for the first time without stopping at the Monument Valley Tribal Park. The rugged buttes, jagged pinnacles, and flat mesas that grace the valley and beyond did not disappoint as they shimmered in the stillness of the January day. Its breathtaking beauty always inspires awe no matter how many times I’ve visited. Traveling the Southwest during the winter is a gamble weather wise, but if the conditions are right one can experience the season when tourism slows to a trickle and can walk about the parks and the visitor centers minus the crowds. It felt as if we had the whole majestic place to ourselves.

Content that our photographers got their shots we hit the road once again with our next stop, the amazing sandstone wonders of Antelope Canyon in Page, Arizona. To tour the slot canyons of Antelope Canyon it is necessary to book a guided tour as it is a big tourist destination even in January. We had made our appointment at 3:00 pm with Ken’s Tour at the Lower Antelope Canyon to catch the best possible winter sun rays and there was no way we were going to miss our allotted time.

Our route lead us 2 1/2 hours through the chaparral terrain (6312) of Shonto, Arizona. As we descended from the high plains the placid waters of Lake Powell came into view. It’s hard to miss the second largest man made lake in the US that covers 190 miles in this arid region. We all breathed a collective sigh of relief that the conditions had cooperated and we would make our tour. And it was simply amazing! It was even better than I had anticipated and far surpassed our expectations. Stunning, spiritual, spectacular, sensational and all the superlatives combined, it was that and more. We also had the best Navajo guide possible who was not only friendly but a wealth of knowledge regarding the geology and history of the “Corkscrew” Canyon. And to top it off he was a photographer who could offer advice as to angles and spots to shoot from and for this amateur photographer his tips were most welcome. It turned out visiting in the off season was a good choice as we had heard that during the high season the experience can be trying to say the least. Highly recommend a winter visit!

Admiring the clouds tinged with pink that reflected off the calm surface of Lake Powell we shivered in the evening light. In earlier times in summer we had camped along its shores and water skied though its red sandstone canyons. And it had been wonderful. But that is only one side of Lake Powell. As our photographers busied themselves capturing their footage I pondered the other side of the reservoir that lay before us. That is the controversial history of the flooding of Glen Canyon and the building of the Glen Canyon Dam in 1956. The mega project was conceived by the US Bureau of Reclamation so that the Upper Basin states could fulfill their obligations under the 1922 Colorado River Compact to deliver a fixed amount of Colorado River water to the Lower Basin states. The plan was ardently contested but the government prevailed and the project went forward resulting in far reaching environmental damage to over 80 side canyons, streams and natural arches, not to mention the loss of habitat to its thriving wildlife. Recreational boating introduced invasive species into the water system and the dam dramatically altered the Colorado River itself. The impact on Native American communities meant that culturally significant places and an unknown number of archeological sites have been lost due to flooding. And it never seems to stop as the disputes over water rights in the arid Southwest continues with the growing demands of urban settlement putting pressure on an already overtaxed river system. As I gazed over the life giving waters of the Colorado mulling over these complicated issues I wished that I could have seen what these ancient lands had looked like before man and his machines had made their mark. These thoughts and memories finally gave way to the more pressing issue of hunger. I put aside my thoughts and was thankful for the joy of my traveling companions. In high spirits we enjoyed the local eats and drinks at a nearby restaurant and reveled in our shared our experience.