The North Atlantic Seas glimmered with floating icebergs and rocky islands streamed with ribbons of glacial melt as I gazed out the tiny window of our airplane at the endless landscape below. It took my the breath away. Awestruck I knew Greenland would be beautiful but it was even more than I had anticipated. Situated between the Arctic Ocean and the North Atlantic Ocean the island covers just over 2.16 million km2 and is the 12th largest country in the world. I had been planning my 60th birthday trip to this vast island for two years and chose September to avoid mosquitos and high season but early enough before the winter arrived. Accompanying Franz and I was our son Stefan – a videographer – and his friend Jolly Schwarz – a professional photographer who both contributed amazing images and films to our documentations. One year prior to our departure I had booked our seaside accommodations on the famous UNESCO World Heritage Site on the Ilulissat Icefjord in Western Greenland, just 250 km north of the Arctic Circle. Ilulissat is located at the mouth of Sermeq Kujalleq, which is the fastest and most active glacier in the world and one of the few where the ice cap meets the sea. The dramatic show of huge ice sheets and cracking sounds of moving and calving icebergs is one of our planet’s most awe inspiring sights.

Our Blue Guesthouse where we stayed looked out to icebergs and whales feeding, diving, and jumping. It doesn’t get more beautiful than that! The magnificence of this ancient landscape was formed 3.9 million years ago from Precambrian rocks that are the oldest found on Earth. The Inuit people who inhabited the island for some time have adapted to this ever changing and challenging environment are an Athabaskan speaking group and are linguistically related to my tribe, the Navajo (Diné) in the American Southwest. So I felt a kinship even before I arrived and when we did meet the local Inuit people they greeted and treated us as relatives, even inviting my son and his friend to interview and film them as they handled their sled dogs. This trip was one of my all time favorites so far and before I left I was already planning my next trip back!
https://visitgreenland.com/destinations/ilulissat/
https://ilulissatguesthouse.com/rooms/blue-house/

The Kangia Icefjord was our first hike in town right after we settled in. We encountered hundreds of sled dogs at the edge of Ilulissat and it was a unique experience. Hiking up a little canyon through black rocks seemed a bit like mountains I have climbed in the past but around the corner in the distance lay an otherworldly sight. Huge blocks of ice shimmering in white and blue. We had arrived at the fabled icefjord we came to see.
http://www.kangia.gl/en

The cold waters off Disko Island provide the perfect environment for the famous sweet and succulent Disko Bay Snow Crab. We chose the Hotel Icefiord as it was rated the top restaurant in town and rightly so. We began with champagne on the outdoor deck with a view looking out into Disko Bay with icebergs and frolicking whales in the waters right in front of the restaurant. The delicate and tasty meat from the icy waters were used in throughout our meal from the creamy Snow Crab soup to overflowing platters of the spidery crustaceans as well as topping our salad. It made our first dinner in Ilulissat unforgettable. The incredible setting and a unique menu is one that can only be found in Greenland, and was one the best meals that I have had the pleasure of eating thus far.
https://hotelicefiord.com

The Ilulissat Icefjord is the “spigot” of the most productive glacier of the Northern Hemisphere. It produces 46 cubic km of ice per year, which is the equivalent of the fresh water the US consumes annually. Due to global warming there were more whales in the area this year than ever before. The locals informed us that it had been the warmest summer in memory and for us that meant cloudless days during our visit with the winter snow falling as we departed. They also joked with us that their country was not for sale!
https://whc.unesco.org/en/list/1149/

A day’s boat trip to the UNESCO World Heritage Eqi Glacier. A unique experience to see a calving glacier. And a once in a lifetime opportunity to harvest 30,000 year old ice for our happy hour gin and tonics!
https://www.greenland-travel.com/inspiration/places-to-visit/eqi-glacier/

A Whale of a Day, Ilulissat, Greenland

Whales, whales, and more whales. In the Arctic. With my loved ones. AMAZING! I could not have asked for a more wonderful way to celebrate 60 years on our incredible planet. We took morning and evening day tours to watch the whales near the icebergs where they feasted on the plentiful nutrients that were found by the floating ice. Thank you to my wonderful husband for bringing us to this incredible island at the top of the world. I am soooo grateful. (Stellar drone footage courtesy of Stefan)
https://www.worldofgreenland.com/en/boat-trips-in-the-disko-bay/whale-safari

From Oqaatsut to Ilulissat, on foot

A 30 minute boat ride and a 6 hour hike. 14 Miles from Oqaatsut to Ilulissat and schlepping lots of photographic equipment. It was well worth it to enjoy the striking colors of the Arctic landscape with the plants changing from late summer to autumn in wine reds and warm ochers that graced the tundra.
https://ilulissatguesthouse.com/tours/hiker-shuttle/

Another Day, Another Whale

Another day and even more whales. I am in whale heaven. I will NEVER tire of these magnificent creatures. We have seen both Humpback and Fin whales with the Humpback being the more common in Disko Bay. Last night we watched a pod of six Fin whales feeding and frolicking outside our windows for hours. Soooo happy!
https://www.worldofgreenland.com/en/boat-trips-in-the-disko-bay/whale-safari

We were extremely lucky to have our personal professional photographer plus drone with us and our videographer son to create amazing films with it. Here is a compilation of the best whale clips.

The Greenlandic dogs are a tough breed and are working dogs and treated as such. They are kept on the outskirts of town, but their barking and howling can still be heard in the distance. It is a primal sound that evokes images of an earlier time. These magnificent canines were brought to Greenland via Siberia over 1000 years ago by the indigenous Thule people. The husky sled dog is not only intelligent, but is a robust creature able to withstand the extreme temperatures of the Arctic as well as the grueling life of a transport animal who also serves in the hunting of seals and polar bears. It is not surprising that it is genetically close to the now extinct Taimyr wolf of North Asia. Today the breed is an integral part of the Greenlandic culture and is considered a national treasure. In Western Greenland it is now illegal to import any dogs from the outside with very few exceptions to keep the breeding lines as pure as possible. Each dog must be microchipped and registered in the national database. When one arrives in Ilulissat from over the far horizon the call of the wild quickly lures visitors out to the hiking trails where the sled dog communities occupy the rocky landscape. They are kept chained up as they can be aggressive and their breeding can be controlled. This is apparent in the segregation by color with white/beige being the most popular color by far. The puppies roam about freely but for me it was hard to see a little one being put into place by an aggressive elder. In summer they shed a lot and can look a bit shabby, but nevertheless they are striking animals with their slanted eyes reflecting their bold acumen. My favorite dog breed EVER!

Magical. For some days we had watched from our windows a Fin whale pod roaming the waters of Disko Bay. It was hard to figure out just how many whales there were because they surfaced and dove at different times. But one evening there appeared to be by far the most we had seen yet so Stefan, drone in hand, hurried to a nearby cliff and managed to catch the group as they passed by. And there were a whopping NINE whales in the pod! Their blow holes are massive. And then they all dove at the same time. Synchronized whale swimming just for us. INCREDIBLE! 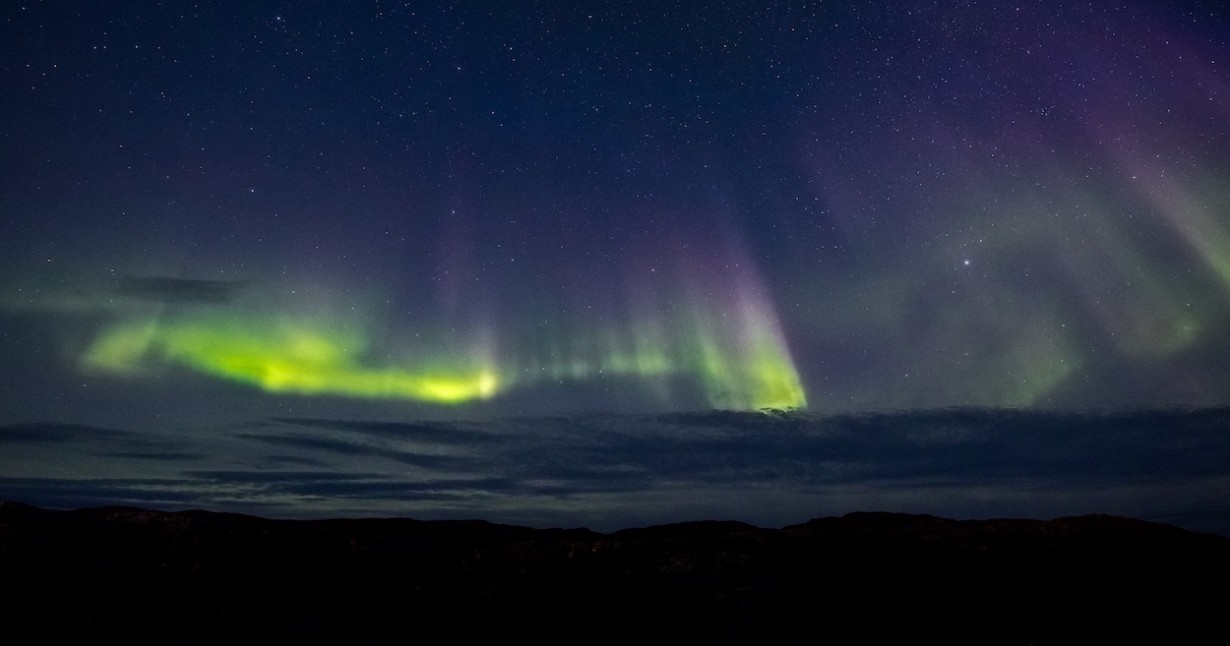 MAGNIFICENT! The skies above Ilulissat were dancing with stunning colors. Although it was still September we were lucky to have been given such a heavenly show. The Inuit people of Greenland believe that the Northern Lights were the souls of the dead who were playing celestial games with a walrus skull while others claim that walruses are playing with the skull of a human. They say that if you whistle towards the heavens while they are active one can contact the dead and the lights will take you to visit them. The Vikings claimed that they were the Armor of Valkyries. Whatever the explanation, the magic of the Aurora Borealis is truly otherworldly. For the Norwegians we were with it was a normal occurrence, but for us it was simply spectacular! Photo courtesy of the talented Jolly Schwarz

Holiday Cheer at the Yazberts-Bregenz, Austria 12-2020