As a fitting end to our ski season my friends and I from Vienna, Bregenz, and Zurich headed to the Canton of Graubünden (en.wikipedia.org/wiki/Graubünden) in Switzerland, where the local language spoken is Romansh. Near Disentis we began our three hour trek to the top of a ridge where the Medelser Hut sits prominently lording over the surrounding valleys (www.medelserhuette.ch). The weather was partially sunny and we all hoped for some bright days of sunshine. On the Saturday of our arrival there were several other parties who had spent one night and the following morning climbed to a nearby peak then headed on home. We planned on staying until Wednesday and from Sunday and we were the only guests. The couple that ran the hut named Petra and Thomas were from Southern Germany and they had just taken over the hut management six weeks earlier. This was a new experience for them to run a place where supplies and waste could only be transported by helicopter in the winter. Petra was a fantastic cook who also baked fresh bread and cakes, we were unexpectedly spoiled rotten. 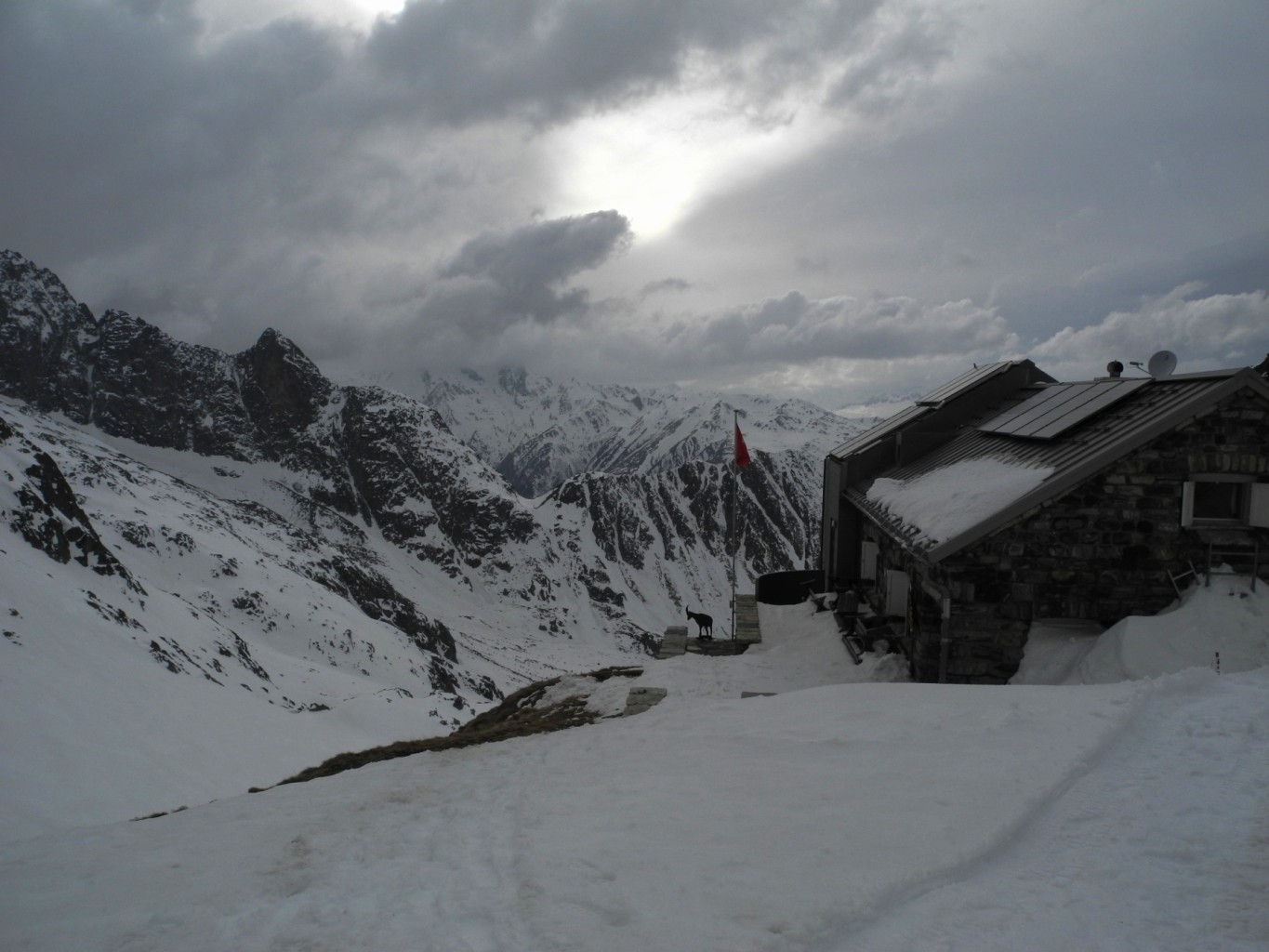 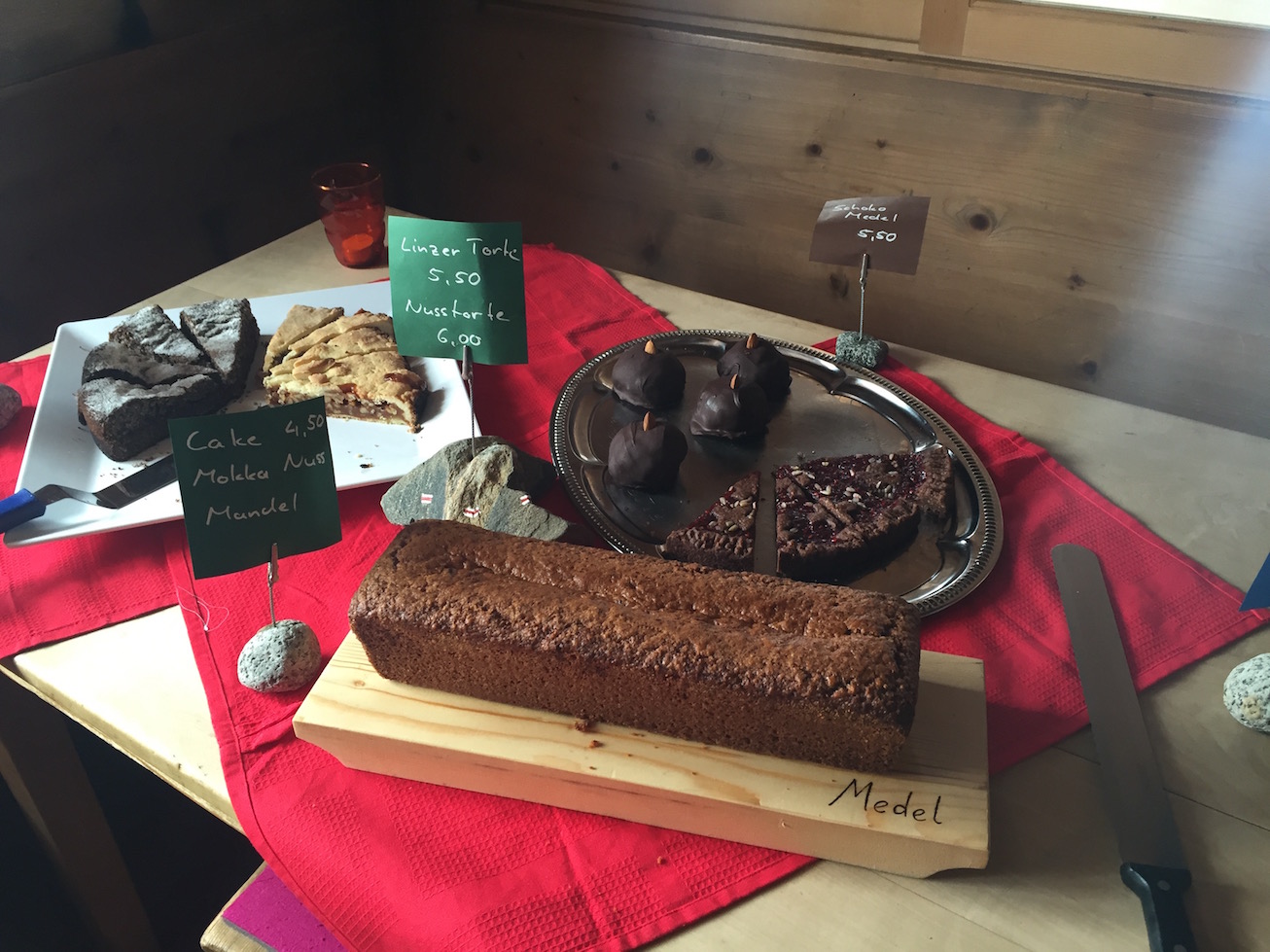 We also learned from them how difficult it is to manage a hut like this. In the winter there is no running water, every drop of drinking water was from melted snow. It is one thing to read this on a website, yet another when one uses the washrooms and no faucet works. The toilets didn’t use water either, instead they had a three stage filtering system for the waste. In the mornings and the evenings two water bottles were placed at the sinks, so that the guests could brush their teeth. Any further hygiene was done outside. We take water for granted, especially in central Europe where we have non-chlorinated drinking water even in our toilets, some people view this as an amazing waste of our planet’s most valuable resource. The text below translates to: The snow of today is your tea of tomorrow. 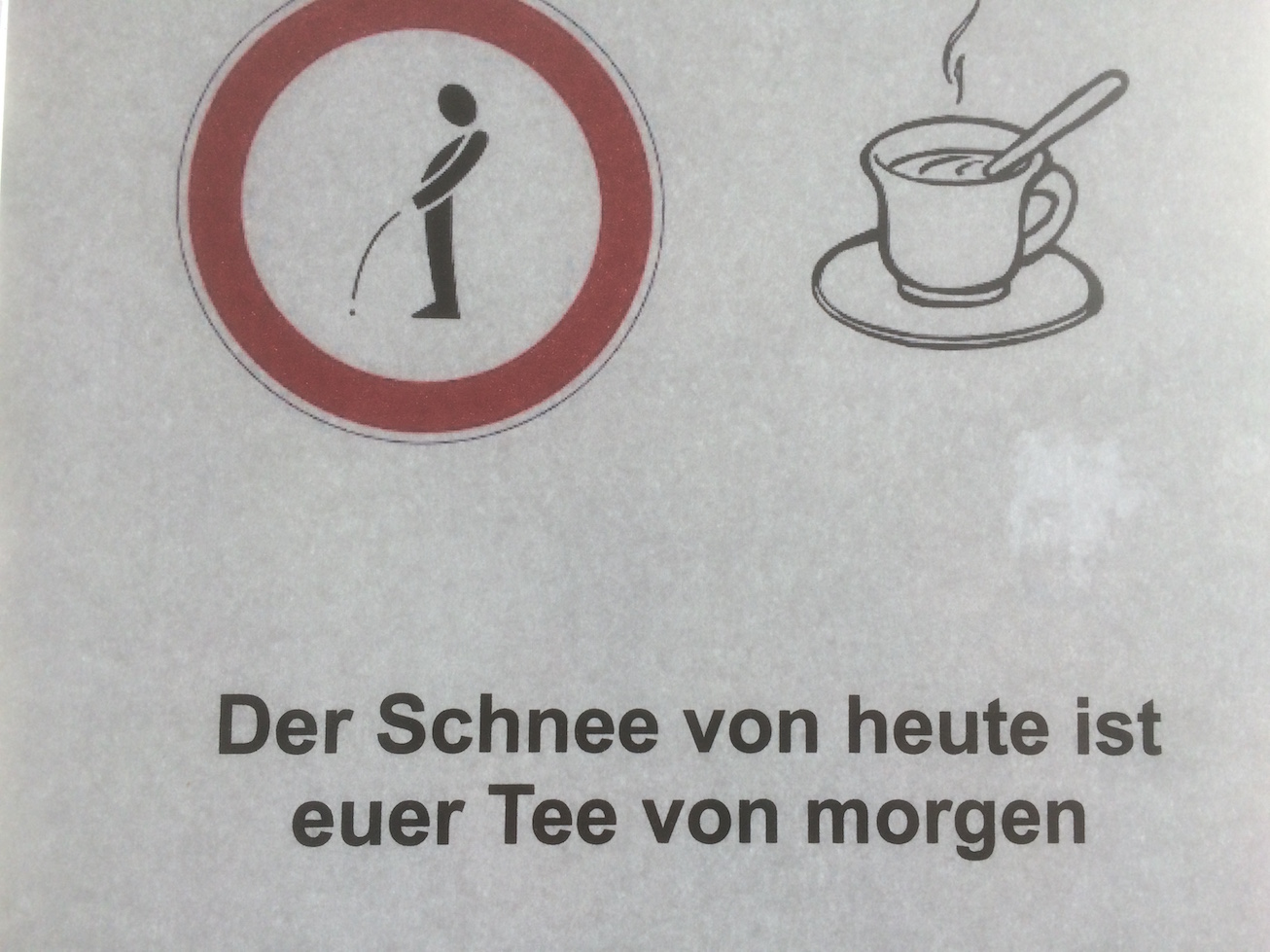 The day after our arrival the weather had turned bad. Fog appeared and the sun was gone. In spite of the conditions, all the parties from the hut ate a 6 o’clock breakfast and headed out for the Piz Medel. Fortunately it had been clear during the night and the snow was very hard. We skied down a few hundred feet then put on our skins and began trekking up to the glacier and beyond. Due to the snow being frozen we used a tool that can best be described as a ski crampon. It provided us with a serrated knife like blade on each side of the binding that cuts into the ice to prevent sideways sliding. One of our teammates decided to take his off, and paid for it with an almost immediate fall and a face forward slide of 120 feet on a surface that resembled rough sand paper. Unfortunately his face showed the consequences for many days. Once we reached the glacier the fog enveloped us completely and threatened us to turn around due to lack of orientation. But we were lucky and the fog lifted, allowing us to see our destination despite the wind that was blowing stronger by the minute. To reach the cross on the peak it was necessary to navigate a precarious narrow ridge, with crampons providing additional grip. The face of the mountain had some beautiful packed powder in store for us. Unfortunately further down the expected “firn” – the top inch of frozen snow melted in our much anticipated descent – never came because of the cold temperature. But we had completed our first peak and happily trekked back up to the hut for an afternoon snack and a wonderful dinner. 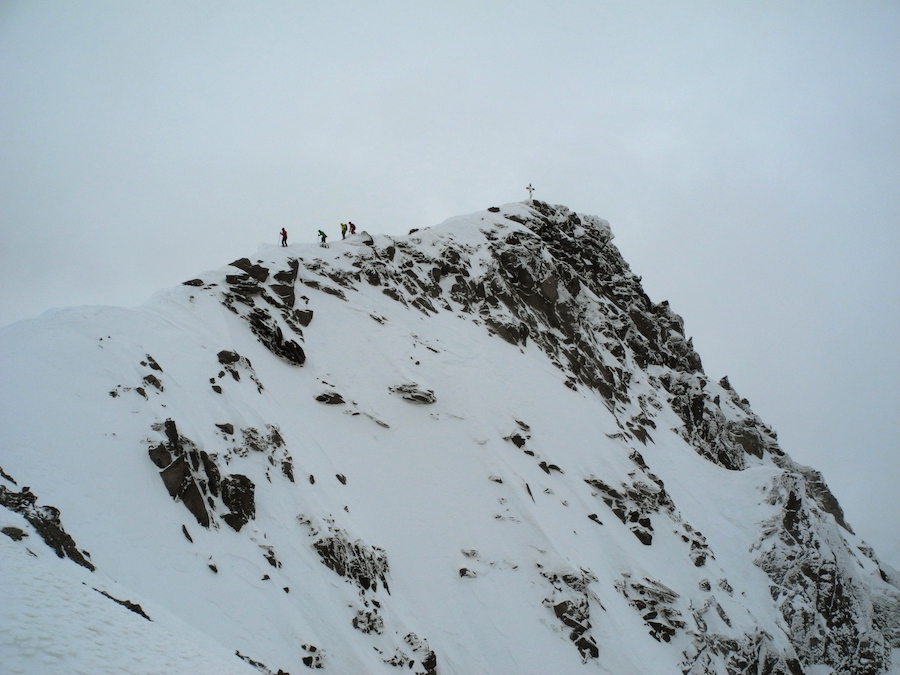 The following day things turned even worse. We were situated on the continental “wind” divide, where the strong southern winds, sometimes coming from as far away as the Sahara, bring precipitation to the southern side, and the northern fronts bring rain and snow to the northern side of the Alps. As we looked down to either side of our eagle’s nest we could see the valley where we had come from had sunshine while we were skiing into the foggy abyss on the other side and into a snow storm. The snow had turned very soft, which made for a unique carving experience, more like surfing than skiing. At the bottom of the steep decline we headed towards the next peak but were forced to turn around after thirty minutes due to the lack of visibility and the increasing winds that blew fresh snow directly into our faces. We headed back up the steep ravine for more R&R and card playing at the hut. The last day was a carbon copy of the previous one. On Wednesday we said good bye to our gracious hosts and headed down into the valley. The wind was still blowing strong, only this time it was at our backs and we were headed down to the sunshine. It was amazing how much snow the wind had melted during the previous five days. We had to take off our skis many times and crossed  a river just to make it back to our cars. Another year, another ski tour!

Andalusia, From Caliphate To Christianity, Spain, 3-2016

Budapest, Our Foodie Destination Of The Year, Bocuse d’Or And More, Hungary, 5-2016