The Spanish foot is on the small side. I found this out recently as I strolled the streets of Madrid admiring the plethora of beautifully hand crafted shoes in every style, color, and quality. Zapaterias seem to line every city block displaying a vast selection of trendy foot coverings. But ONLY up to size 38. If you have a larger foot, forget it. I don’t know how many shoe shops I canvassed on a recent trip to this historic city as I “sole” searched to find the perfect leather zapatas. To my disappointment the shoes didn’t fit and I couldn’t wear them, so my pursuit of finding a women’s size ten proved elusive.  Unfortunately for me the Spanish ladies have Lilliputian feet to match their smaller stature so I gave into the inevitable and instead satiated my desire for fine leather goods, or as the sales woman described it “buull” leather, and bought an elegant purse with matching wallet. So my footwear odyssey came to a fitting end. Thus my attention turned to much more important matters: the quest for authentic Spanish cuisine and libations.

The human stomach goes through an interesting transformation when one sets foot on Spanish soil. Normally when we are full we stop eating. But in Spain this does not occur. The food is so enticing that even the person who professes they can’t have one more bite once they eye more tasty tidbits ignore their bodies’ protestations and succumb to the alluring temptations of the Spanish kitchen. So what does an entrepreneur, an importer, a scientist, a gardner, a programmer, and a teacher do in in Madrid? Why eat of course. My husband and I had met up with four long time friends from California and our eclectic group armed with insatiable appetites set out to experience some down home cooking Madrid style. I had read a review in the New York Times lauding a small eatery where chefs, food writers, restaurant owners and vintners go to eat while in Madrid and its offbeat description of fat sardines “swimming in concentric circles of tomato concasse…’ certainly caught my eye. So off we went in search of concentric sardines. And what a find it was. We spent an enjoyable evening (and the following days lunch as well) in fine company happily tasting our way through the menu at the restaurant Asturianos. We relinquished our food and wine choices to the knowledgeable and charismatic restaurant host and owner Alberto whose mother Doña Julia began the establishment back in 1966 and today is still the chef. Out of her kitchen comes pure pleasure disguised as food. We devoured the most wonderful dishes such as the lip smacking sardines doused in olive oil, meaty cockles, flaky cod, garlicky black mushrooms, traditional fabada beef stew with fava beans, and all was served with crusty bread for loping up the tasty sauces from our plates. Accompanying our selections we drank the restaurant’s own 2012 Malposo Crianza that added a lively Syrah note to our savory fare. Our dessert was described as flan but its rich creaminess was similar to a cheesecake and topped with carmel sauce. At the close of our evening meal our appreciative group gave Doña Maria a well deserved round of applause for her muy sabroso culinary talents. A tasteful end to a delicious evening.
http://www.nytimes.com/2012/10/14/travel/where-madrid-chefs-go-for-real-spanish-food.html

Madrid is great for walking. Using the good foot and public transportation we toured the emblematic sights that Madrid had to offer. The highlights for me were the Madrid Cathedral and the Prado Museum. The Madrid Catedral de Santa Maria la Real de la Almudena is relatively new with construction that began when the capital was transferred from Toledo to Madrid in 1879. The building was interrupted by the Spanish Civil War and was only completed in 1993. The Gothic Revival structure is quite impressive at 104 m long and 76 m wide with the dome diameter measuring at 20m. The Neo-Gothic interior is an interesting mixture of modern and historic elements. The vibrant interior is adorned with stained glass windows, a massive golden altar, and its colorfully embellished ceiling, domes, frescoes, and paintings are quite impressive.Some of the art is a bit unusual such as the oil painting Obra Misionera de Jesũs y Maria of the beautified Mother M. Pilar Izquierdo of the Sisters of the Order of Diocesan Right. The spatial perspective of her read as if she were hovering in space and conjured up images of the TV series The Flying Nun. An interesting piece.
http://www.catedraldelaalmudena.es 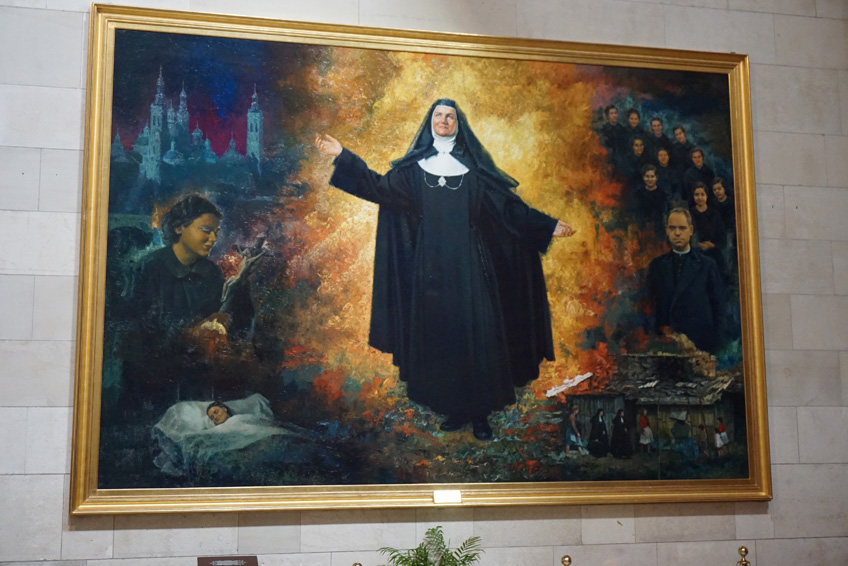 When in Madrid one has to make the requisite pilgrimage to the Prado Museum. And it is magnificent. For me it was a highlight of our tour. The history of Spain is represented within its Neo-classical walls. It would be easy to be intimidated by the sheer size of the collection but if one narrows their scope it can be manageable and a pleasurable experience. I chose to focus mainly on the Spanish artists and spent an enjoyable morning immersed in the glories and ignoble past of the Reino de España. The collection boasts famous European artists such as Titian and Rubens and holds the worlds most extensive collection of Spanish art including the iconic Las Meninas by Velãquez and Goya’s The 3rd of May 1808,  as well as the adopted Greek El Greco’s two Maja works. But for me the most compelling yet repelling was the 1503 triptych The Garden of Earthy Delights by Hieronymus Bosch. Creeeepy. The Dutchman’s esoteric painting gave me a big case of the heebie-jeebies but nevertheless I was mesmerized by Bosch’s bizarre interpretation of the dire consequences of amoral earthly behavior. It’s enough to scare any wayward Christian straight. It is one of the most unique pieces of art and is deserving the accolades that have afforded this masterpiece of the imagination. You’ve simply got to see it to believe it.

Throughout the city the wealth of yesterday’s Imperial Spain is apparent in the monumental architecture such as the grandeur of the Palacio Real de Madrid that graces the city center. But today’s Spain is grappling with its economy, immigration, and tabloid royal scandals, so it’s easy to forget that they were once a dominant global player. But for me whose tribe hails from the American Southwest where the Spanish colonial past has left significant cultural consequences for the region, it doesn’t seem so far removed.  Spain has had a complex history and they’ve been ruled by Iberians, Visigoths, Vandals, Moors, Romans, Habsburgs, Bourbons, and Fascists and their long story is filled with conquest, reconquest, and colonialism that has reverberated around the world. One would need a lifetime to explore the many facets of the country but as usual our journey was not long enough. This visit was special for us reconnecting with good friends and exploring an important European capital and I look forward to my next visit. But on to our next stop: Holy Toledo. Viva España!