The jagged peaks of the Dolomite mountains loomed on either side of the narrow gorge as we reached the end of the valley near San Vigilio di Marebbe in South Tyrol. The landscape looked right out of a Lord of the Rings film. The winds had blown Sahara sands in from North Africa and had left yellow patches all over the surface of the snow which gave the scenery an even more otherworldly appearance. It is rare that there is so much snow this far south at the beginning of April. The winter had been bad for ski resorts north of the Alps, but huge amounts of snow had been delivered in the south. This was good for myself and two friends who had come to scale the mountains of South Tyrol and enjoy the great mixture of Tyrolian “Gemütlichkeit”, Italian food, and culture. The valley we overnighted in was one of the few areas where they speak “Ladin” in addition to German and Italian. We stayed at the Pederü hut, a newly built Alpine hotel with all the amenities, great food, wine, and hospitality. We  slept well in anticipation of scaling the mountains the next day.

Breakfast was at 6:30 am sharp, one hour later we were in our gear and strapped the skins onto our touring skis. The skies were cloudy as we made our ascent. Quite a few other skiers were on the same path, but we veered up a steep ravine and were soon alone. Higher and higher we climbed until we got to a saddle with a breathtaking view of the surrounding peaks. At the same time the sun came out to complete the spectacular scenery. Several hours and much exertion later we finally reached the highest point of the day and took a welcome tea break admiring the stunning view that lay below us. Unfortunately the snow had become soft really fast. 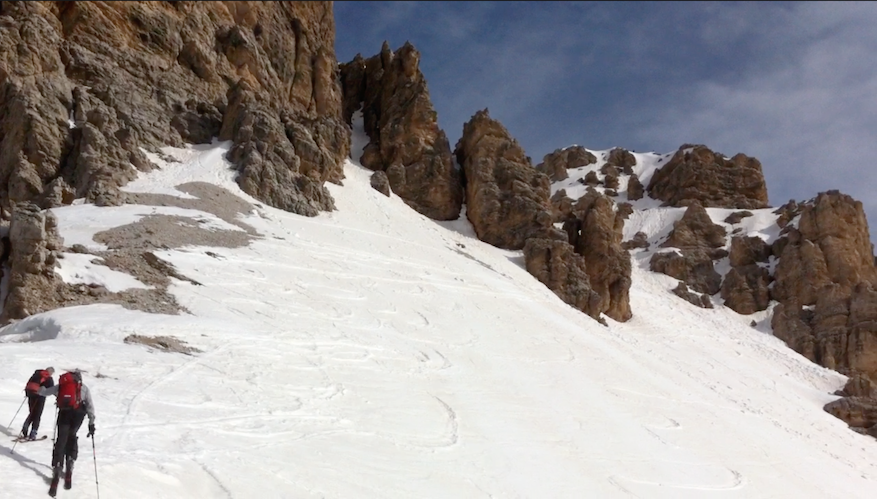 Rested and rehydrated, the skins came off, boots were tied down, bindings were adjusted, and off we went down the opposite route we had come. The snow had broken up and was filled with the frozen tracks of earlier skiers, and it was not pleasurable to ski whatsoever. Further down conditions improved and the slope opened up to an unmarked expanse. The snow was soft at the top so we carved our turns and left our signature for all to see. The altitude was almost 3000m causing us to breathe hard as we descended to a high plateau. Our final goal was to reach a hut on the neighboring peak, so on came our skins and off we trudged uphill once more. The warm temperatures had lent the snow a mushy quality that required our legs to work harder. After hours of up and down we finally reached the Sennes hut where we ate up some well deserved pasta and drank lots of liquid to replenish our fluids.

After lunching we began our descent into the narrow valley below back to our hotel. It felt more like descending into a gauntlet as the canyon got narrower and we ended up on what felt like a twisting bobsled run. Finally we came out onto a military road built in World War I. During the conflict South Tyrol was the location of heavy fighting between Austrian and Italian soldiers. Both sides had dragged cannons high into the mountains and battled each other in every conceivable manner they could. These somber thoughts were on our minds as we filed on by. 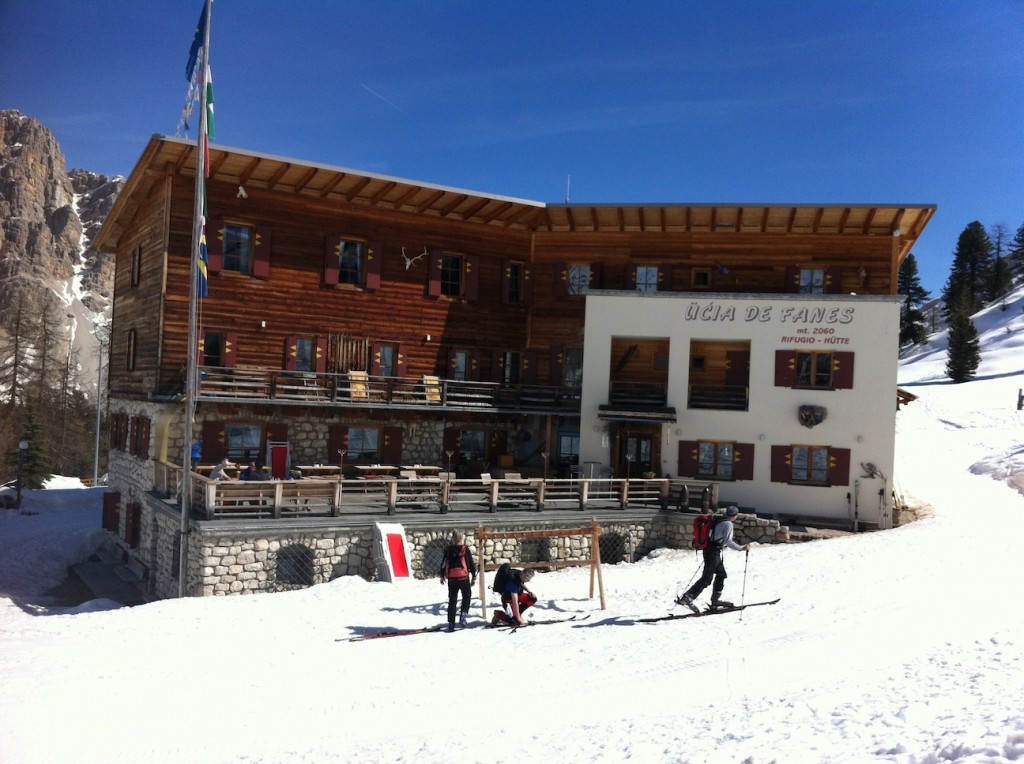 The next day we packed our belongings and headed higher to the Fanes hut. We stayed 2 nights in true alpine fashion in a room for eight, with a shared  bathroom and a shower outside in the hallway. We woke up to cloudless skies and the night had been really cold, which meant better snow conditions, especially on slopes facing north. Our destination for the day was Monte Castello. Our initial climb was 150m up and from the top of the plateau we could see our intended peak visible in the distance. The silhouette of the Dolomiti mountains reminded me of the American Southwest with similar peaks of rock rising from snowfields instead of the desert sands. A short downhill later we traversed a side valley, donned our skins once more for the final ascent of 2 1/2 hours, which took almost all we had left. But we were rewarded with breathtaking views at the top and no other skiers in sight. We rested a while and enjoyed the panorama we had labored to see. Satiated we skied down, then right back up to our plateau. One last run back to our hut topped off our incredible tour and of course welcomed libations. An excellent dinner completed this superb day.

Our last days tour was a route with a southern exposure. The snow on the way up was hard, fortunately a couple of hours later the warmth from the sun made it soft as silk. Our last run down to the Pederü hut was on an untouched white carpet of snow. An incredible ending to of a 3 day ski tour in a fairytale location.