Mountain Biking in the Bregenzerwald, Austria, 6-2014

On a very hot June morning my friend Alejandro and I set out to explore the local mountains by mountain bike. We went from Bregenz to Dornbirn and then started scaling the “hinterland”. At Kehlegg we reached a point high above the Rhine valley. Continuing on through the woods on dirt roads we climbed higher and higher until we reached our destination, the Weissenfluhalpe. Sharing the view from this lovely spot were numerous mountain bikers and countless cows that are spending the entire summer in lofty heights on fat meadows.

Alex arrived with a bang, his rear tire exploded exactly as we pulled up to the hut. We decided to have a “Radler” first, a refreshing drink mixed from beer and lemonade, it translates to “biker”. After a short break we proceeded to fix Alex’ bike. Since we didn’t have a spare tire we cut up the old inner tube and created a few layers of protection under the gash, and then put about half of the normal pressure in the tire. We were wondering how long this temporary fix was going to last. But alas, we made it down the other side of the mountain to Bezau, the main town in the Bregenzerwald. After a wonderful raspberry cake at the Café Natter we decided to continue our quest. We jumped on the main bike path through the valley and cruised (I cruised and Alex hobbled) to Andelsbuch. From there the bike path is the old railroad track of the narrow gauge Bregenzerwald train (lovingly called the “Wälderbähnle”), http://www.waelderbaehnle.at. The train now runs only from Andelsbuch to Bezau because there were several land slides in the gorge of the Bregenzer Ache, along which the train used to run. After Egg the track dives down into the gorge and stays next to the river all the way to Kennelbach, close to Bregenz. Currently the track is only maintained until the campground in Doren, http://www.camping-bregenzerache.at. After that it becomes very difficult to navigate, there is a half collapsed bridge and two tunnels to cross, and countless small land slides cover the track and make you carry the bike for up to several hundred meters. We had planned to do it, but progress was seriously slowed by the continuous flattening of Alex’ tire. He had to work at least twice as hard as me during the whole ordeal. We were considering what to do next at the campground when a very nice man overheard us and offered us to drive us to our car. We had been on the road for around 5 hours by then and gratefully accepted this amazing offer. 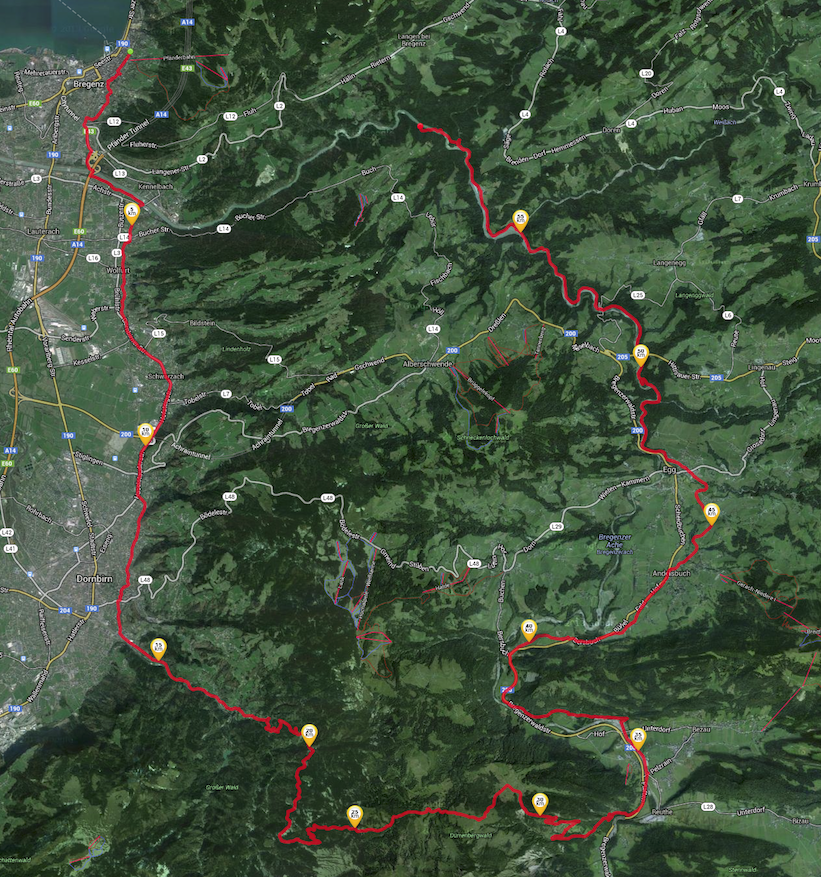