This year the weather was unusually warm in Austria, in fact it was the fifth warmest January since records began in 1768. Our local mountain snowfall levels were so low that we cancelled our New Years ski vacation and instead headed to the warmer environs of Italy to ring in the New Year. We were lucky and were blessed with the most wonderful driving weather for this time of year. The sun was dazzling bright and the snow peaks glistened. We drove from Austria past the small snowy alpine village of Sufers with its lovely Sufnersee and then through the San Bernardino tunnel. We descended the winding roads into the valley of the Swiss Italian Canton of Ticino with the characteristic Italian orange red farm houses that grace the steep hillsides with orchards and terraced grape vines. At the base of the mountain sits the picturesque Lago de Lugano. The freeway runs alongside the lake and one can get glimpses of the inviting lake and its charming cities that rest along its shores.

We crossed the border into Italy and travelled through the Lombardy region past fields of rice and grain until we entered into the sprawling metropolitan area that surrounds the bustling city of Milan. Founded originally by the Celts it was later conquered by the Romans eventually becoming the capital of the Western Roman Empire. Power changed hands from France, Spain then to Austria, and finally in 1859 it became the new Kingdom of Italy. In the early 1900’s the city was a leader in industrial progress but suffered greatly during World War II. Post war Milan recovered rapidly becoming the country’s main industrial, commercial, financial, and design center. Milan is an interesting combination of sophistication, glitz, cutting edge architecture that stands in stark contrast to the decaying facades of its glorious past. It’s a city that has arisen after years of neglect whose streets are filled with energy, purpose, and immigrants. The city was quiet after the clamor of Christmas and the holiday decorations adorned it. We settled in our lodgings for the night and headed out to enjoy the radiance that emblazoned the city center. 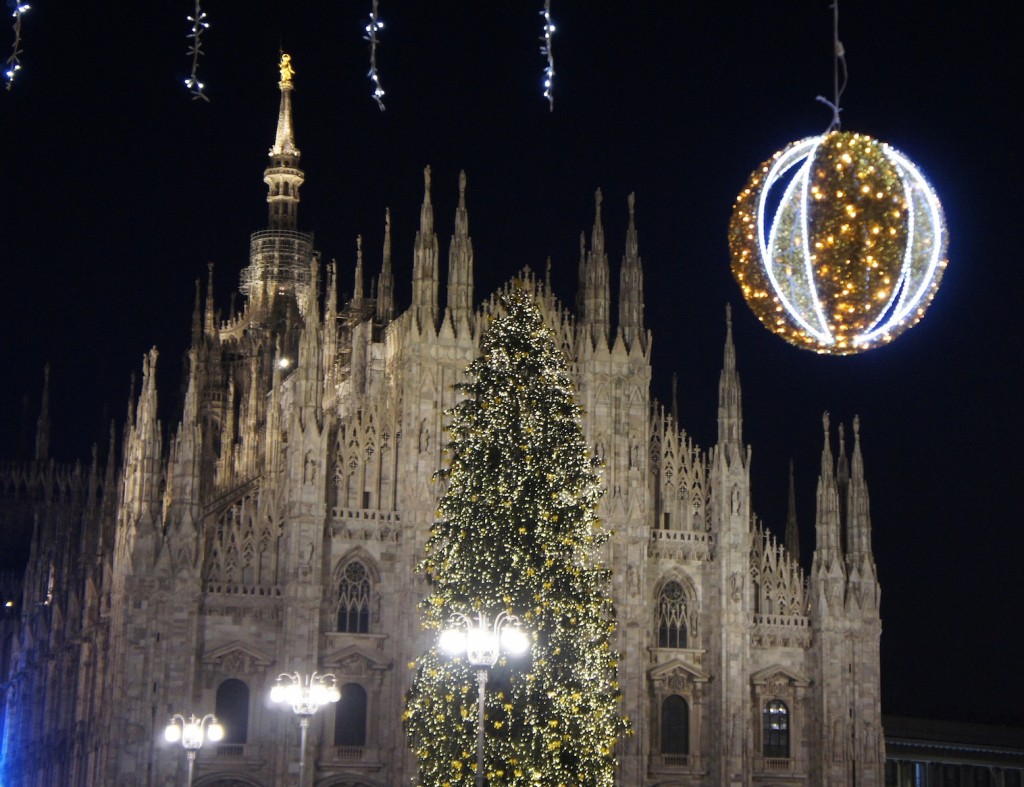 We found our way to the main piazza and the Milan Cathedral was enhanced with towering Christmas trees and glowing lights. The Duomo di Milano is the fifth largest cathedral in the world and it was simply magnificent. Crowds of well dressed Italian people had congregated there to enjoy the sights and the Christmas spirit permeated the air. The Galleria Vittorio Emanuele II is one of the oldest shopping malls and it’s crowned with a four story double arcade. It was especially glorious with the high domed ceiling embellished with blue lights that looked heavenly. We made our way through the city admiring the sights and the festive shop windows until we reached the church Santa Maria della Grazie whose convent wall is graced with the famous mural of Leonardo da Vinci’s The Last Supper. After paying homage to the great master we continued on our meandering walk through the city passages and had our hearts set on a succulent Osso Buco for our evening meal. But alas, due to the holiday we had to settle for a more modest fare for supper, but we were still able to enjoy the evening hours with an assortment of full bodied Lombardy wines.